Namibia is said to be the land of red dunes, dirt roads and eerily quiet coastal stretches. There’s space to breathe, to reconnect with the natural world. But, as I venture through the country on a 4×4 camping trip that’ll take me from town to desert, I soon discover that Namibia is even more than that – it’s supernatural…

I like looking out the car window. To watch the landscape go by in a soft blur of green and yellow and tawny brown, and to let your mind drift over random thoughts, is to peacefully while away the time on a road trip.

But then a warthog emerges from the bush and, attempting to cross the road, it disappears in front of the car ahead and all hell breaks loose in the Strumpman vehicle: an emergency stop won’t be easy with a 4×4 caravan attached to our Prado and no one wants to see Pumba get flattened. A moment later we exhale simultaneously as he reappears and scuttles to a halt on the other side of the road as if that whole ordeal hadn’t happened.

We left Cape Town three days ago, yet, with kamikaze warthogs on the loose, it already feels like we’re worlds away. Spanning over 5000kms, from Cape Town to Etosha National Park and back again – with plenty of breathtaking destinations in between – and involving many a rutted road, desolate otherworldly landscape and close encounter with a jackal, this 17-day trip will show just why Namibia is likened to a foreign planet that intrepid travellers return to over and over again.

On the road: Grünau & Windhoek

“Do you think it will show us where the Woolworths is?”

Windhoek loomed in the distance, and my mom was peering at a map of the city that pinpointed a few garages, accommodation options, and grocery stores – with the exception of a Woolworths.

The day before, my parents and I – packed in a 4×4, towing a Conqueror Commander caravan to match – traversed the Noordoewer border post, which forms a barrier between South Africa’s N7 and the B1 of Namibia. It’s a weird feeling, crossing into another country by road. When travelling by aeroplane, the time spent in the air signals the gap between point A and B, yet the road doesn’t yield quite the same effect. The veld changes gradually as time passes and the transition into Namibia – completed on the same day we left Cape Town – is seamless save for some forms and a stamp of the passport. However, as soon as Noordoewer is replaced by a grey-brown landscape dotted with nothing but large, obscure rocks reminiscent of a prehistoric meteor shower, I know I’ve returned to the familiar unfamiliarity of our neighbouring country.

Situated 139kms north of Noordoewer, a speck of a town called Grünau functioned as our first stop-over, and we booked into the Grünau Hotel as the sun was setting. The following morning, we got hustling early to be in Windhoek by that afternoon, where another on-the-fly booking was made – this time at an actual campsite. Urban Camp had the appropriate rustic, youthful feel and the occasional sound of a passing car as a reminder that you’re not quite in the bush yet. It’s also conveniently on the same road as Joe’s Beer House. If you do one thing in Windhoek, go to Joe’s. With hundreds of empty Jagermeister bottles lining the walls, a dusty bicycle hanging from the ceiling and merry, beer-guzzling tourists at the table nearby, I practically inhaled my Kudu steak and Long Island Ice Tea. All thoughts of Grünau Hotel’s frozen veggies – and even of Woolworths – were soon forgotten.

After two-and-a-half consecutive days of travelling, and a heart-stopping encounter with a daredevil warthog, the moment finally arrived to set up the caravan and settle down at Okaukuejo. It’s one of three campsites in Etosha, 22 270 square kilometres worth of national park area named after the vast salt pan that the fences enclose. On arrival, a hefty bull elephant brushed past the camp’s perimeter like a good omen for what was to come.

Days at Etosha offered a simple, though at times busy, routine: wake up early to coffee and Ouma’s rusks followed by a morning game drive, lounge at the waterhole, late-afternoon game drive, sunset at the waterhole, braai, snuggle up by the waterhole…again. Yes, the waterhole was worth the thrice-daily visits. A low stone wall forms an amphitheatre around it and I’d sit for hours reading books and snapping photos as the animals came and went, constantly shifting the scene. On the fourth day, a photographic tour-group arrived and, along with their tripods, they skulked around the wall’s edge in time with the setting sun. You’re not supposed to talk, so it’s blissfully quiet save for the whisper and click of camera shutters, hushed chatter among other travellers, and a gentle splash as the elephants or rhinos or gemsbok took an afternoon swim. 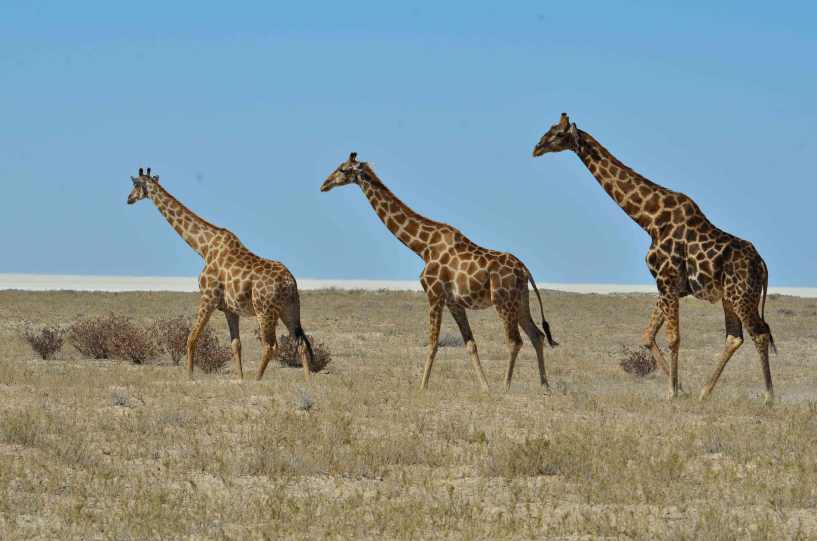 Etosha hasn’t seen rain for over two years and certain stretches were so grey and lifeless that it was easy to become despondent. But, huge herds swarmed around the salt pan’s edge at Ontdeka waterhole, and the greenery on the Halale side of the park was a refreshing change and offered better sightings. No lions, though. Well, there are plenty lions in Etosha, we just didn’t see them. Our friendly Italian neighbours at Okaukuejo delighted in recounting the tale of the nine-strong pride (including cubs) they’d spotted at Salvadora waterhole. We retraced their steps, but saw nothing except springboks and once you’ve seen one lazy springbok herd, you’ve seen them all.

Our final evening curtailed any lingering disappointment, though. While it may sound like an African cliché, watching the sun set behind the spiny acacias, while drinking icy-cold Amarula, with the two intrepid travellers I call my parents and a couple elephants for company, was well worth the indulgence. Plus, if you were still aching to see a predator (or scavenger) or two, fear not because you’ll have black-backed jackals prowling around your campsite come dinner time, eyeing out your boerewors as they did with ours. Just don’t feed them.

Thanks for visiting my blog, and stay tuned for PART 2 of my Namibian adventure…

Hi, I’m Emma but my family call me Bucket. I live for adventure, love nature and am always hungry. Welcome to my blog!