The three largest inhabited islands in the Seychelles are supposedly all same-same – lots of clear blue water, palm trees, granitic rock and honeymooners. About this I couldn’t disagree more. Sure, all of these things are in abundance on Mahé, Praslin and La Digue. But, as soon as the Cat Coco ferry arrived at La Digue’s port after a quick 10-minute journey across the bay from Praslin, I could tell that a completely different experience awaited.

That feeling had a little something to do with the fact that La Digue is only 10 square kilometres, and a lot to do with its primary mode of transport, the humble bicycle. These were already waiting at the port, arranged in crooked, colourful rows. I was reminded of arriving at the port near Centraal Station in Amsterdam (a city famed for its cycling culture) and being confronted by a giant, multi-story bicycle parking lot…except in a more tropical, low-key sense.

La Digue might be smaller and quieter compared to its more developed counterparts, but it’s no less abundant in the adventure department. Although, this being the Seychelles, you’re not really obliged to do much else all day besides lie on the beach, sip cocktails, work on your envy-worthy suntan and just basically live your best and most fabulous life. Unless, of course, you’re like me and can’t sit still due to travel FOMO (or something like that). I often feel the need to explore every single facet of a new destination to feel satisfied that I’ve truly experienced it. We might have been given the weekend off from volunteering with GVI on Curieuse (which you can read all about here) to relax and rejuvenate our weary bodies, but sitting about “doing nothing” wasn’t high up on my list of priorities. That being said, I did decide to stick in and around La Passe, a sleepy village on the east coast and home to the Marina. 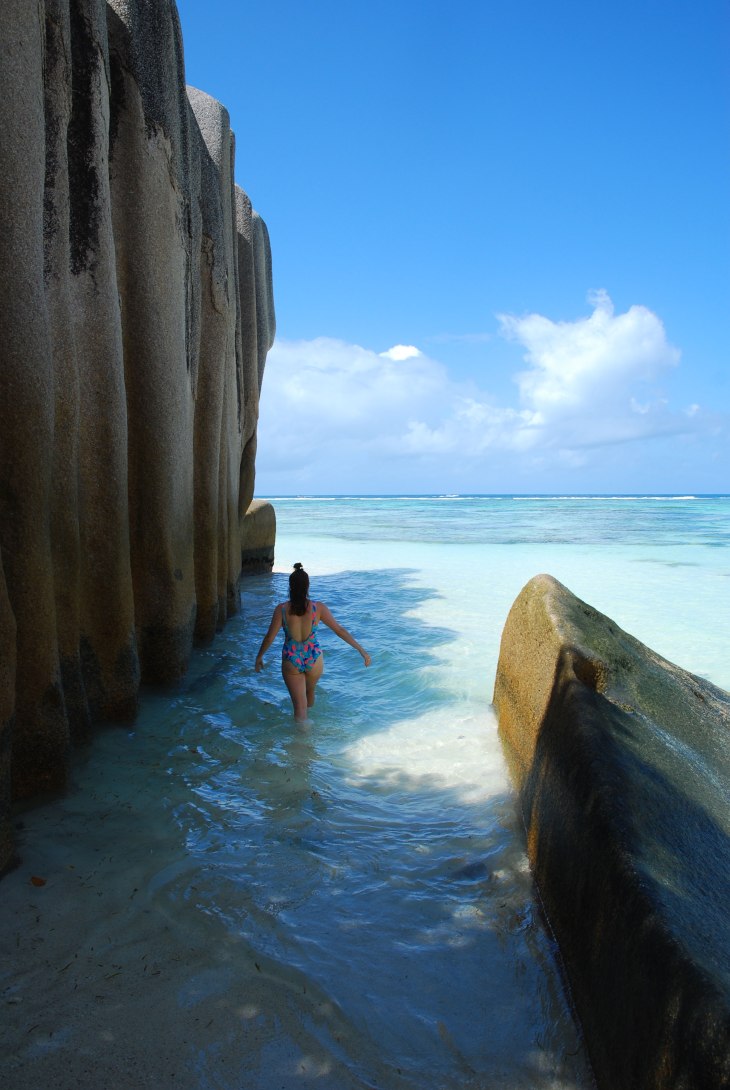 If you’re like me and struggle to locate your chill and sit still even when in tropical paradise, here are 5 ways to spend a day in la Digue:

The bicycles are an essential part of La Digue’s charm – and my favourite aspect of the island’s character. They’re not only adorable and highly photogenic (especially when they’re of the vintage variety), but they also allow for a slower paced lifestyle. There’s no waiting for buses or taxis, you can get up and go at a whim, and you can cycle along the roads as leisurely or as briskly as you like. That being said, the roads in La Digue are more narrow, cobble-stoned lane than bustling city street. As such, there isn’t much of a public transport system in La Digue and hardly any cars, besides a few taxis, the odd construction vehicle and little antique buggies that ferry tourists between the hotels and other attractions. Many people simply meander by foot through the small villages, often stopping in the shade of the palm trees for a drink or a chat.

Besides for the ease of mobility and the environmentally friendliness factor, what I love about exploring by bike is that I could stop off anywhere, at any time – like the bright pink ice cream shop or the soft peach coloured church that caught my eye en route Anse Source D’Argent and demanded my attention (and that of my camera lens). Or, choosing to abandon all other plans for the afternoon and simply leaning our bikes against a tree at Anse Severe, and enjoying the beach at that special time of day when the sun is just about to set and the heat isn’t quite as intense.

Upon arrival in La Digue, the Rastas will ensure you’re equipped with a trusty, two-wheeled steed for the duration of your stay. Expect to pay about 150 SCR per day, or 200 SCR for two days.

2. Spend a chilled (or not so chilled) morning at Anse Source d’Argent

While I love a pristine, deserted beach as much as the next intrepid traveler, try not to be like the boys from my volunteer group and walk hours to the opposite side of the island (thinking they were headed towards a beach famed the world over) only to find an isolated bay with a distinct sign saying “Big Waves. Not Safe for swimming” (or something to that effect) and more stray, salty sea-dogs than content sunbathers on holiday.

Let’s just say they were more than bleak to find out later in the day that Anse Source D’Argent, the object of their search and one of the most legendary and most photographed beaches in the world, awaited a mere 10-minute bicycle ride away from where we were staying in La Passe. After stocking up on water at one of the supermarkets (the cheaper alternative to buying from the beachside restaurants), my friend – and designated travel buddy – Sam and I took a leisurely cycle to the entrance of L’Union Estate. Here we paid a 100 SCR park entrance fee, and onwards we cycled past a pen filled with giant tortoises and former coconut plantations, before parking off our bikes near the restaurant and walking the rest of the way to the beach.

Here I was confronted by a length of soft white sand, a still blue ocean and lush palm and takamaka trees, a pristine stretch of nature broken only at intervals by clusters of granite boulders. The sand beckons you to lay out your towel for a sunbathe, and that calm water (protected by a reef a couple 100 metres out) demands a good wallow. But, if you aren’t quite ready to relax, the water’s transluency and stillness also makes it an ideal spot for snorkelling. Seriously, I’ve never seen water so dazzlingly clear before. You know there’s that saying “It was so beautiful, it made my eyes hurt” (or something) – the light reflecting off the sand in the water at Anse Source D’Argent is so unbelievably bright that it actually started to hurt my eyes.

Have gotten rid of some energy and searched a while underwater for sea turtles, I happily hung up my gear on a branch to dry and retired to my towel for a snack and a nap. 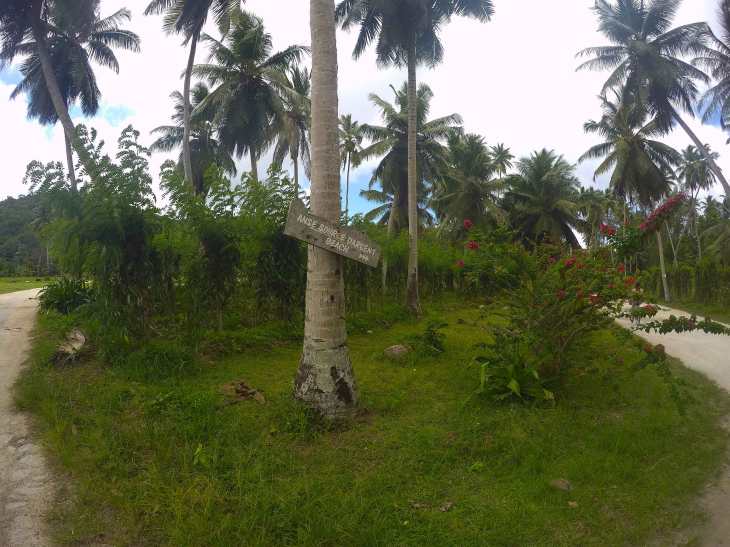 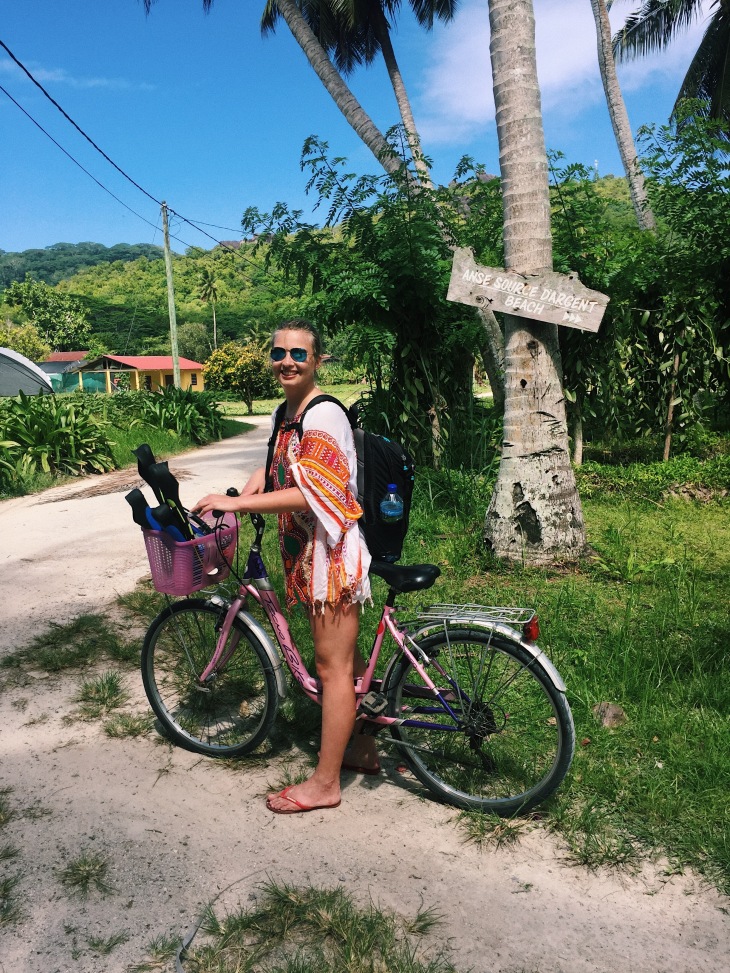 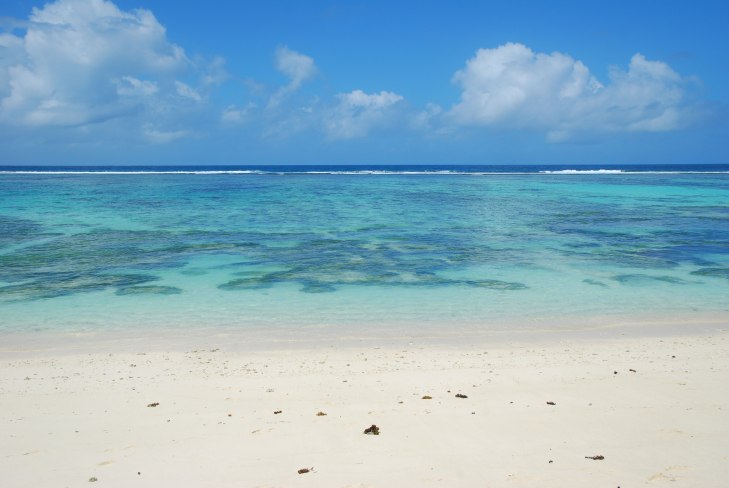 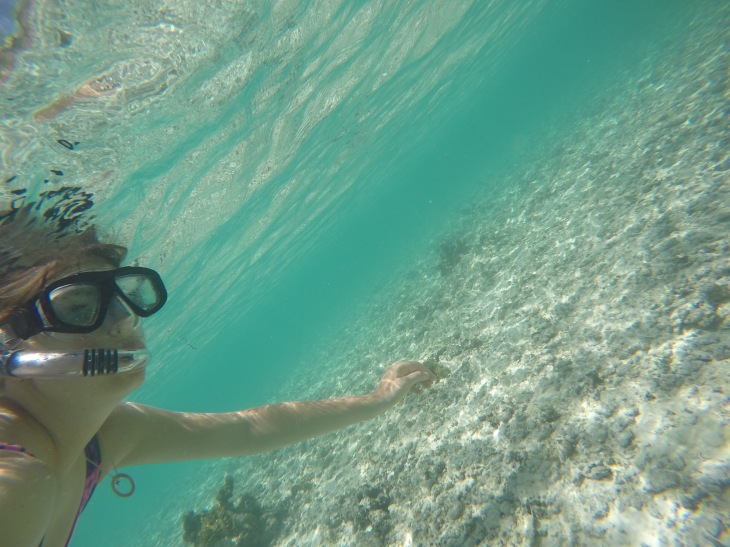 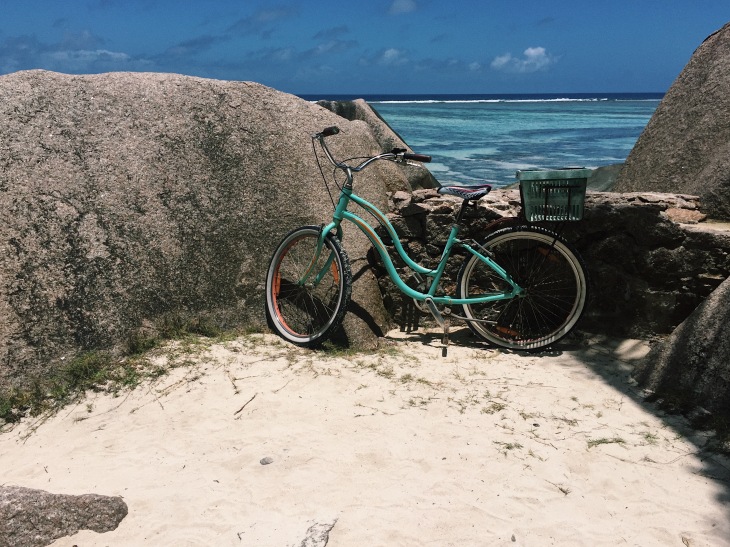 While Anse Source D’Argent lived up to its legendary reputation in the photographic department, Anse Severe was my favoured beach from which to discover La Digue’s marine life. Just beyond a shallow sand shelf, the water is a good couple metres deep which means that you’re not only less likely to kick your shin on a coral reef…as I almost did more than once while splashing about at Anse Source D’Argent. But, you’ll also see a greater variety of sea creatures, like a giant, grumpy-faced, grey mass otherwise known as a humphead parrot fish, or even a sea turtle (not that I saw the latter, but I had a feeling they were lurking around). 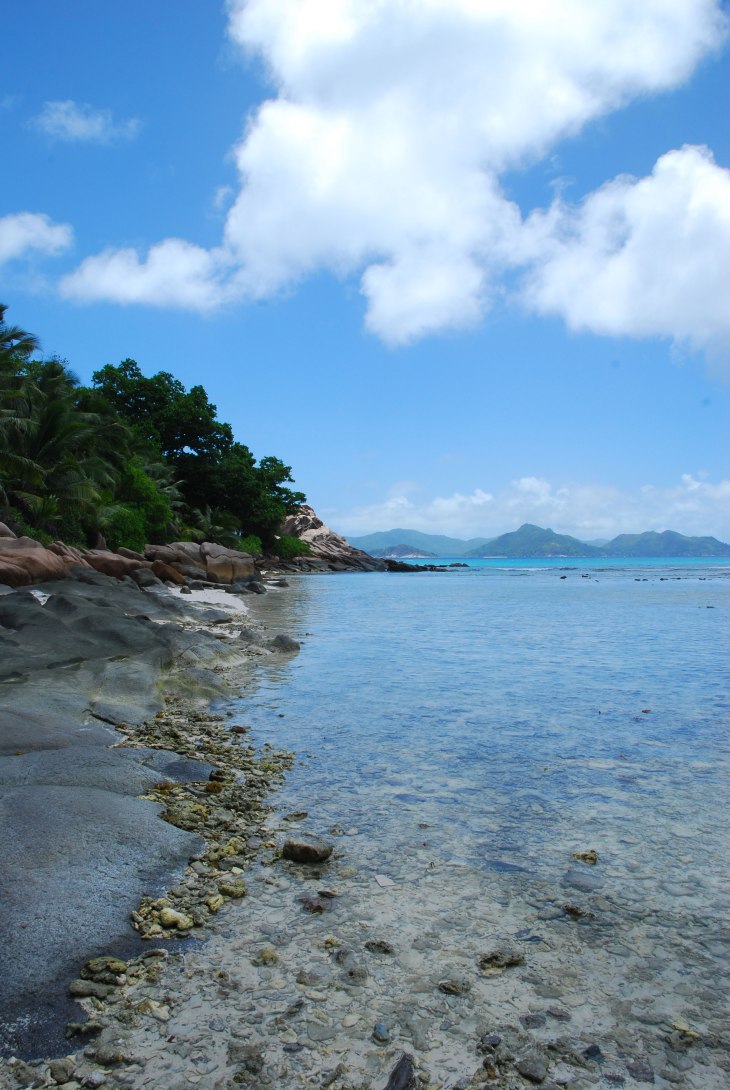 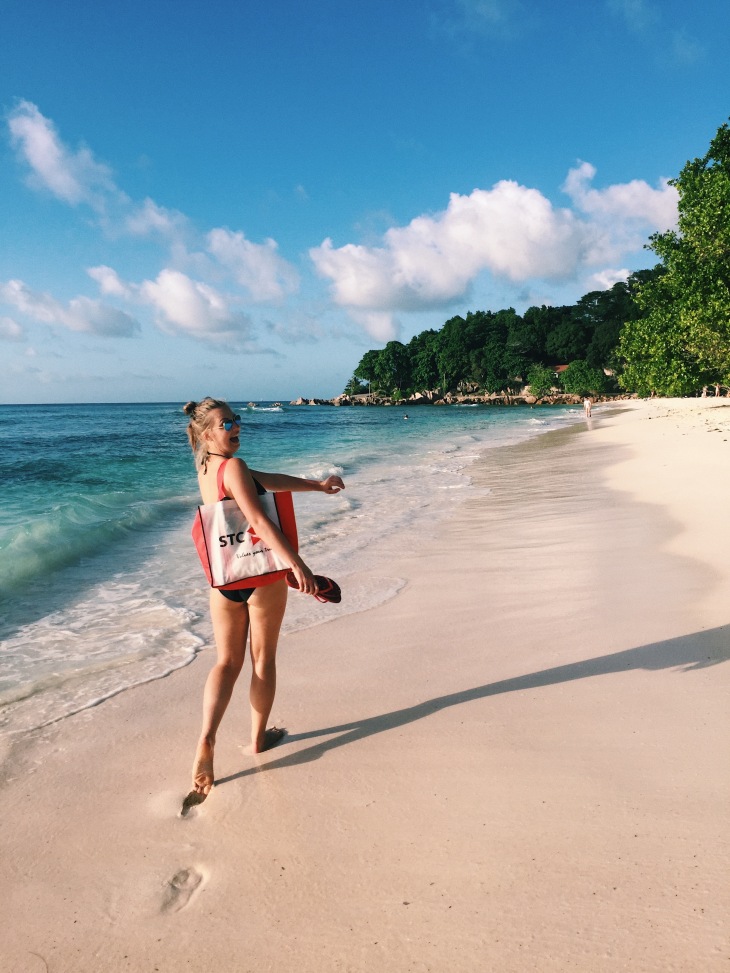 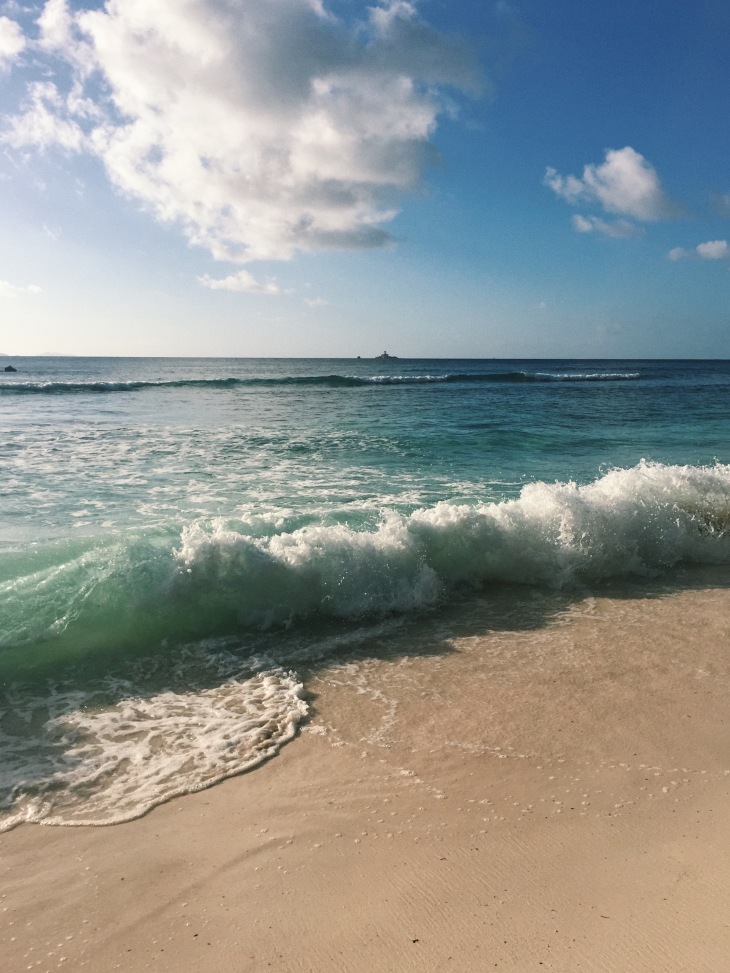 4. Lunch it up at Fish Trap

…or tuck into some fresh fruit bought from the stalls on Anse Source D’Argent, or sip on one of the juices made while you wait alongside Anse Severe. Either way, sampling some local food is, to me, an important part of experiencing any new destination (I even put together an entire photo diary dedicated to all the delectable and insta-worthy food of the Seychelles, which you can view here).

Fish Trap in particular, though, was one of my favourite foodie experiences of the trip. And I’m not only saying that because I started the lunch with a super strong “Okay, Emma, let’s get day drunk on one cocktail” mojito that I gulped down way too fast. Fish Trap is a local favourite in the centre of La Passe, especially for fresh seafood and, after a week of simple vegetarian meals on Curieuse island, I had the biggest fish craving. I ordered a whole grilled fish with roast veg and a side of traditional Creole mango salsa, and it was so delicious I forgot that I don’t like broccoli and just inhaled it all.

The restaurant’s interior is decorated with shimmery mosaics which will surely draw your attention (if the smell of seafood on the BBQ hasn’t already) and sits right on the beach. Some tables are set out on the sand near the calm water, but it was a bit too hot and bright out there at midday. It’s also very reasonably priced for a Seychellois restaurant (which are notoriously expensive). 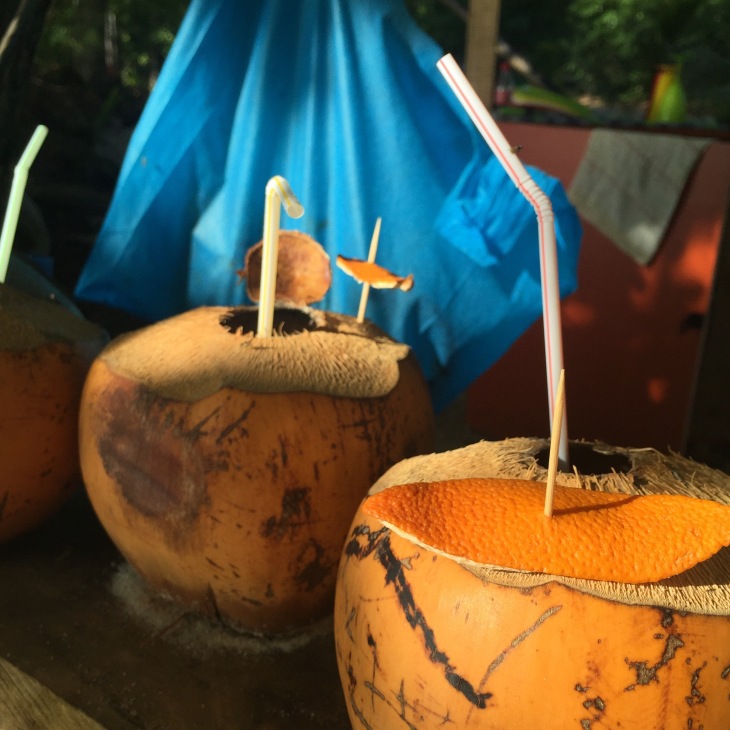 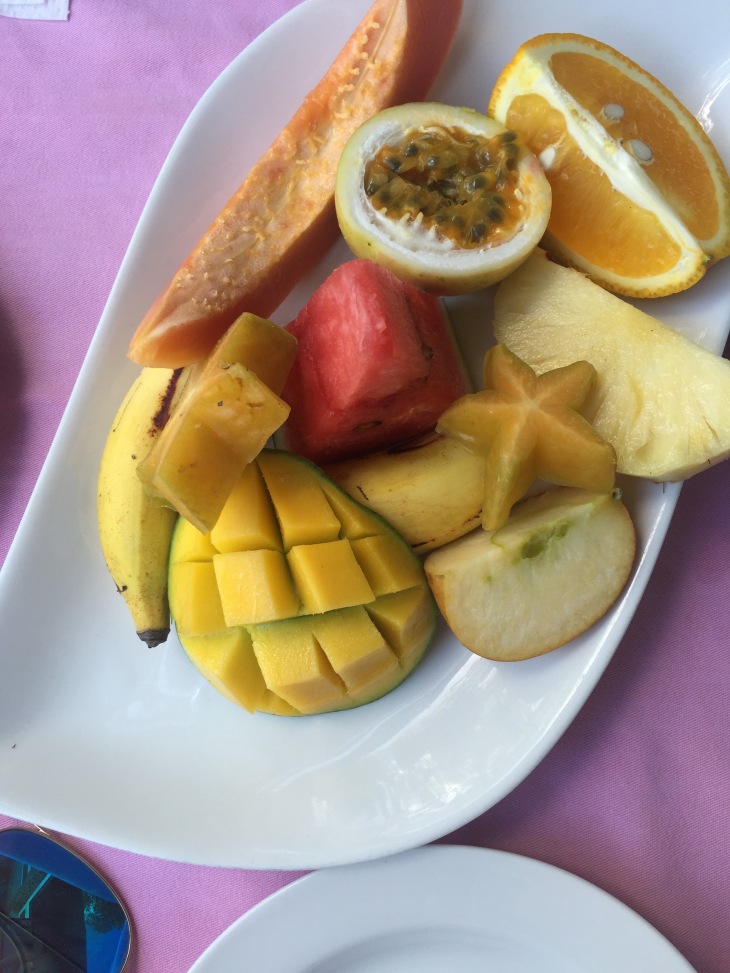 Maybe I didn’t look hard enough, but the curio shops in Cote D’Or on Praslin and in Beau Vallon on Mahé were far less exciting than those on La Digue. I could’ve spent an entire afternoon in these shops, which comprise much of the village centre in La Passe, getting lost amidst hanging rows of sarongs and silk shirts, shelves filled with tiny glass tortoises, hand crafted magnets, keyrings made from lucky beans and decorated with colourful pom-poms and a wide variety of beauty products produced from locally sourced ingredients like coconut, vanilla and sugar. 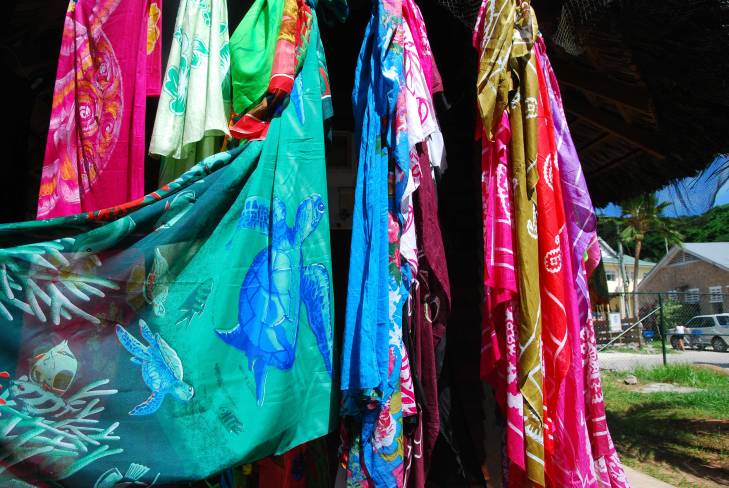 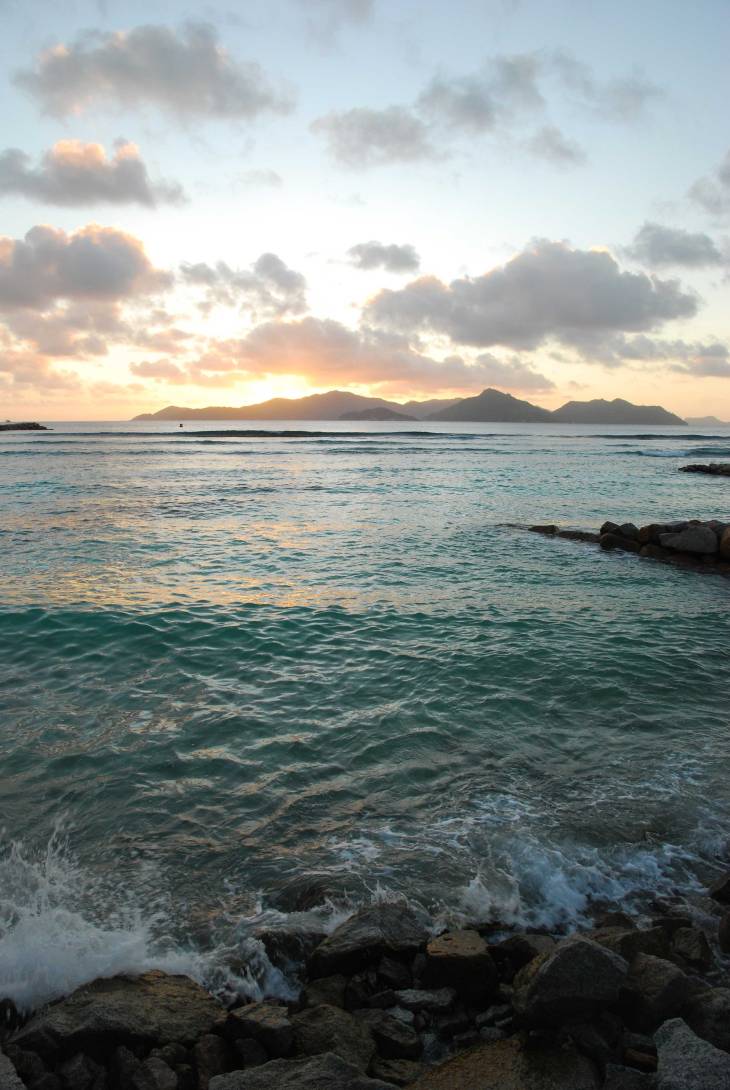 Hi, I’m Emma but my family call me Bucket. I live for adventure, love nature and am always hungry. Welcome to my blog!